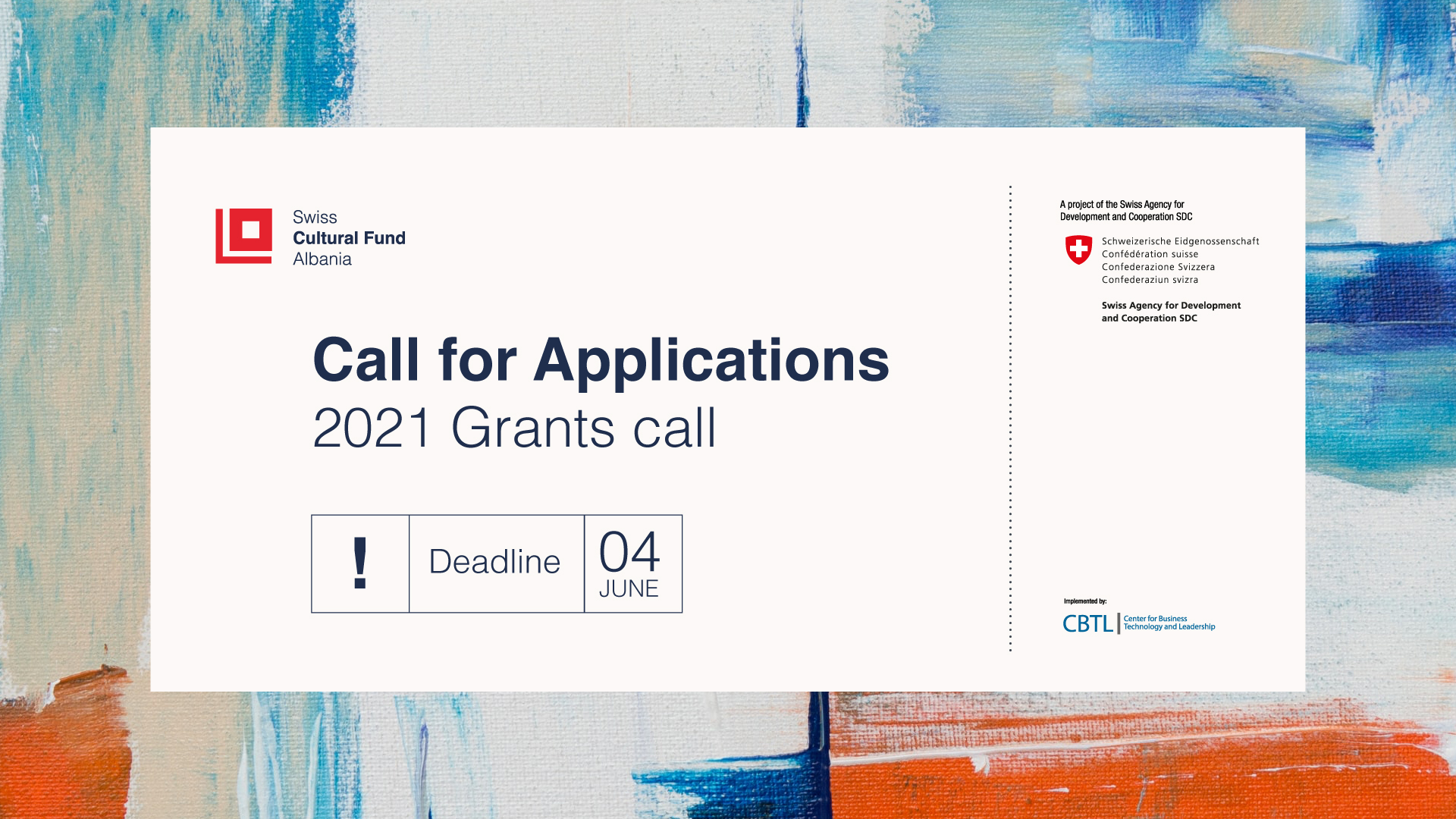 04 May Open call for proposals for the 2021 grants

Posted at 21:02h in Uncategorized

Swiss Cultural Fund has the pleasure to announce the open call for proposals for the 2021 grants.
This call is open to applicants that fall under one of the following categories:

SCF invites eligible applicants to submit proposals based on the following thematic areas: 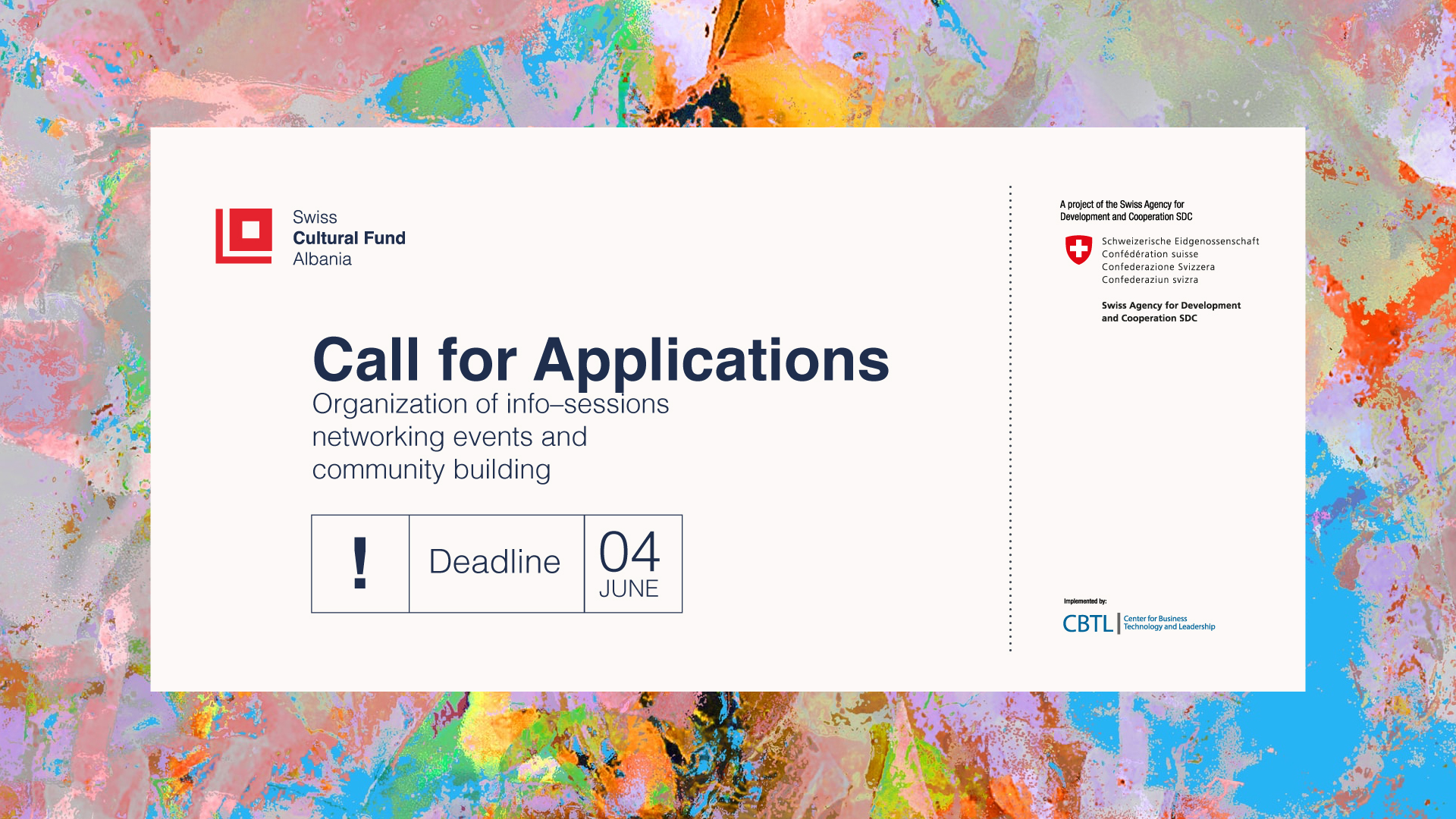 04 May Open call for the organisation of info–sessions, networking events and community building

Posted at 20:41h in Uncategorized

Swiss Cultural Fund has the pleasure to announce the open call for the organisation of info–sessions, networking events and community building.
A Review and Expert Opinion on the Effectiveness of the first phase of the Swiss Cultural Fund recommended a strengthened communication strategy, in order to guarantee bigger community engagement.Based on this feedback, the SCF team is working to design and implement:

In order to achieve the above-mentioned goals, through this call, SCF is looking to hire a qualified consultant.
If you are interested to apply, please download the application guidelines in the link below. 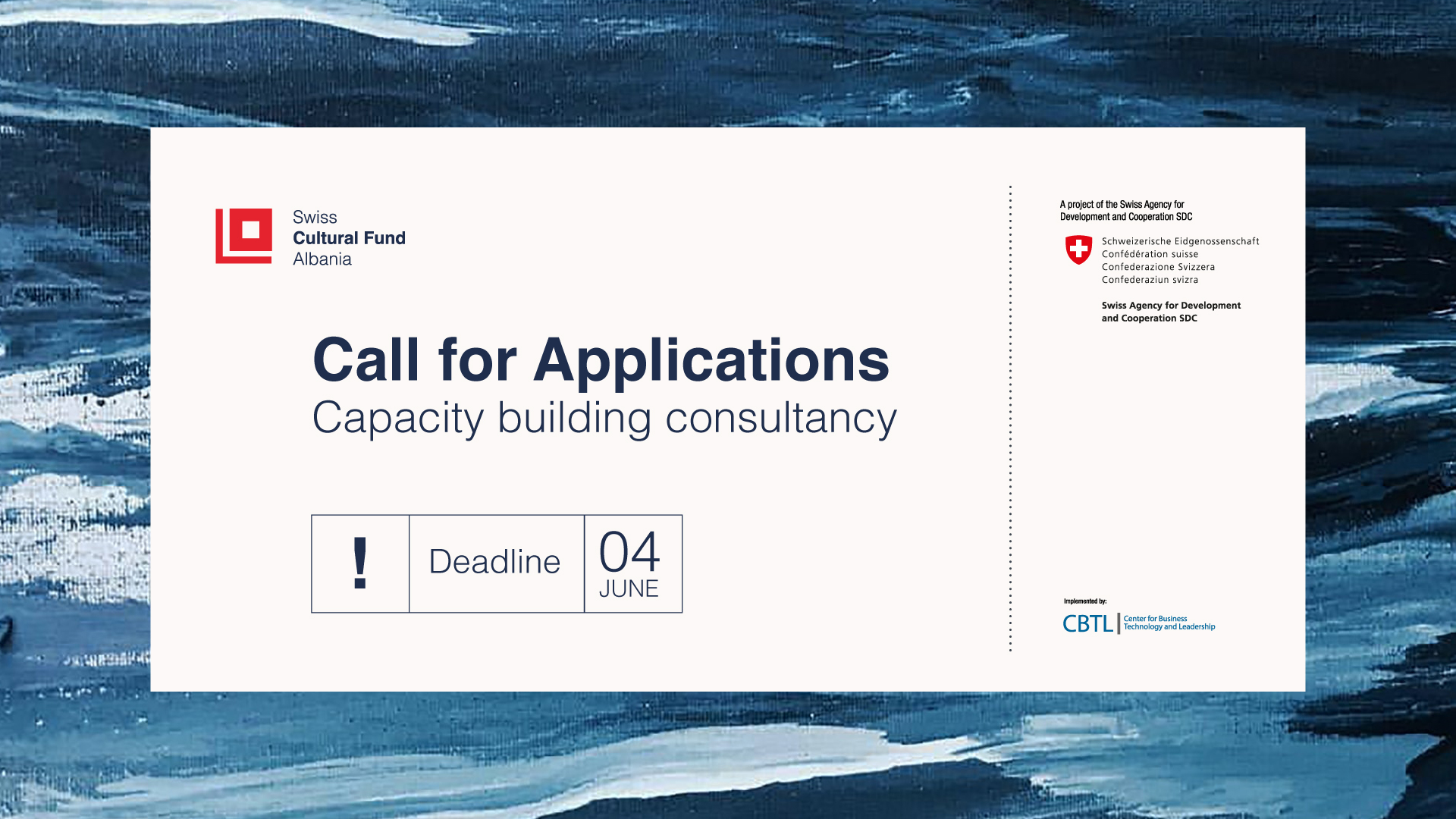 04 May Call for capacity building consultancy

Posted at 20:30h in Uncategorized

Swiss Cultural Fund has the pleasure to announce the open call for capacity building consultancy.
Under the Capacity Building pillar there are included Training Packages for the Local Grant Applicants:

This Program is designed to provide trainings on how to write project proposals with cultural backgrounds and how to use technology in this field, for the young artists, organizations and other sectorial stakeholders, and equip them with the knowledge and tools required to achieve excellence in cultural grant applications. The trainings are aimed to be fit for the local art community.The Capacity Building instrument especially targets potential emerging artists with innovative initiativesthat will be interested to apply for the projects under the local calls for proposal, which will be issued during this project or other similar-related projects.
Through this call, SCF intends to hire a consultant or an organization to undertake the following consultancy tasks.
If you are interested to apply, please download the application guidelines in the link below. 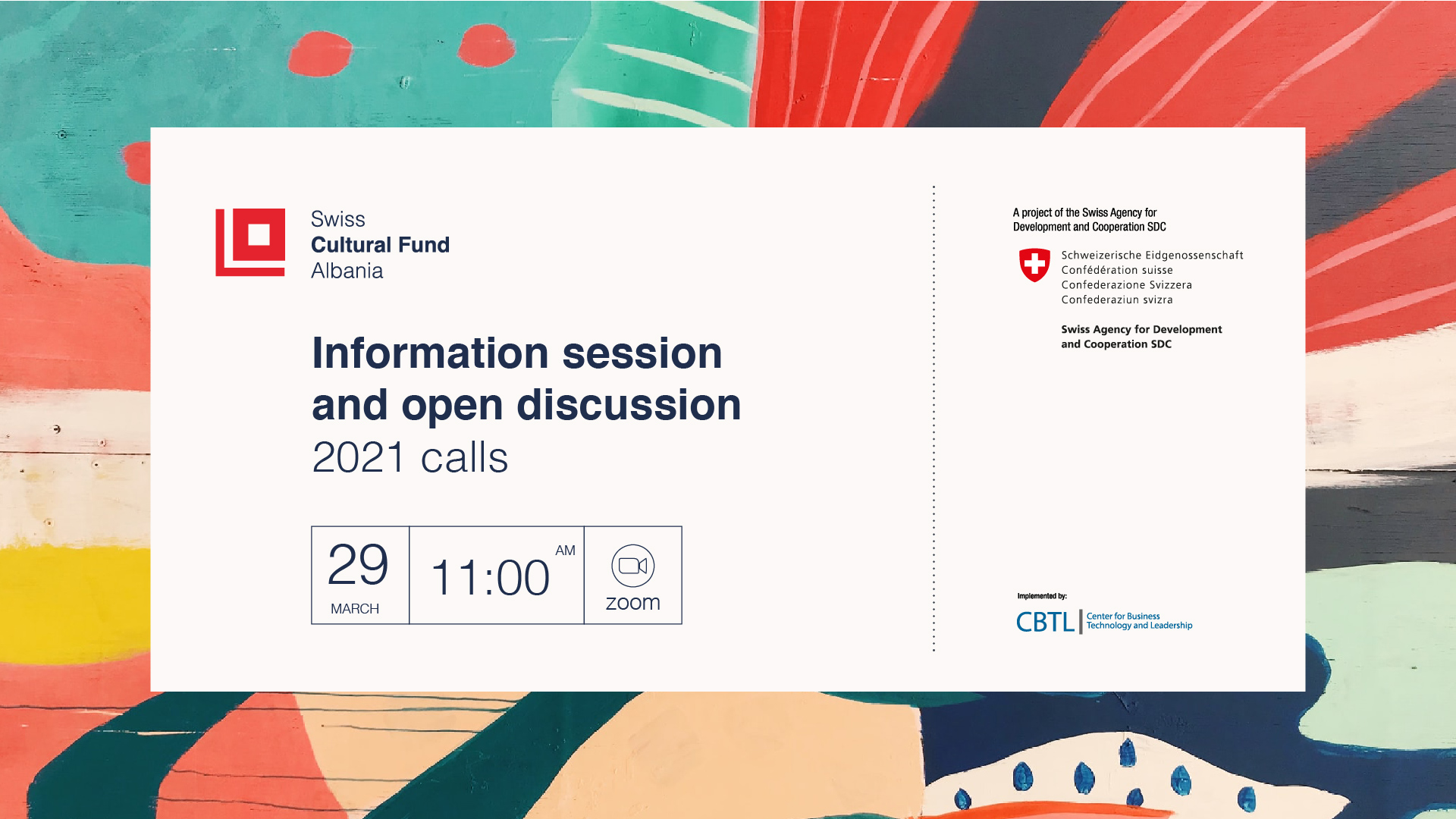 Posted at 13:43h in Uncategorized

Prior to launching the 2021 call for grants applications, the Swiss Cultural Fund has the pleasure to invite artists and other professionals of the independent cultural scene in an interactive information and discussion session.
SCFA’s objective of this meeting is to receive suggestions from members of the community on potential topics of interest and project typologies that can be supported through our local grants scheme in realistic timelines, budgets and pandemic-related restrictions.
Your voice is important to us. If you would like to participate, please save the date and confirm by filling the form in the link below. 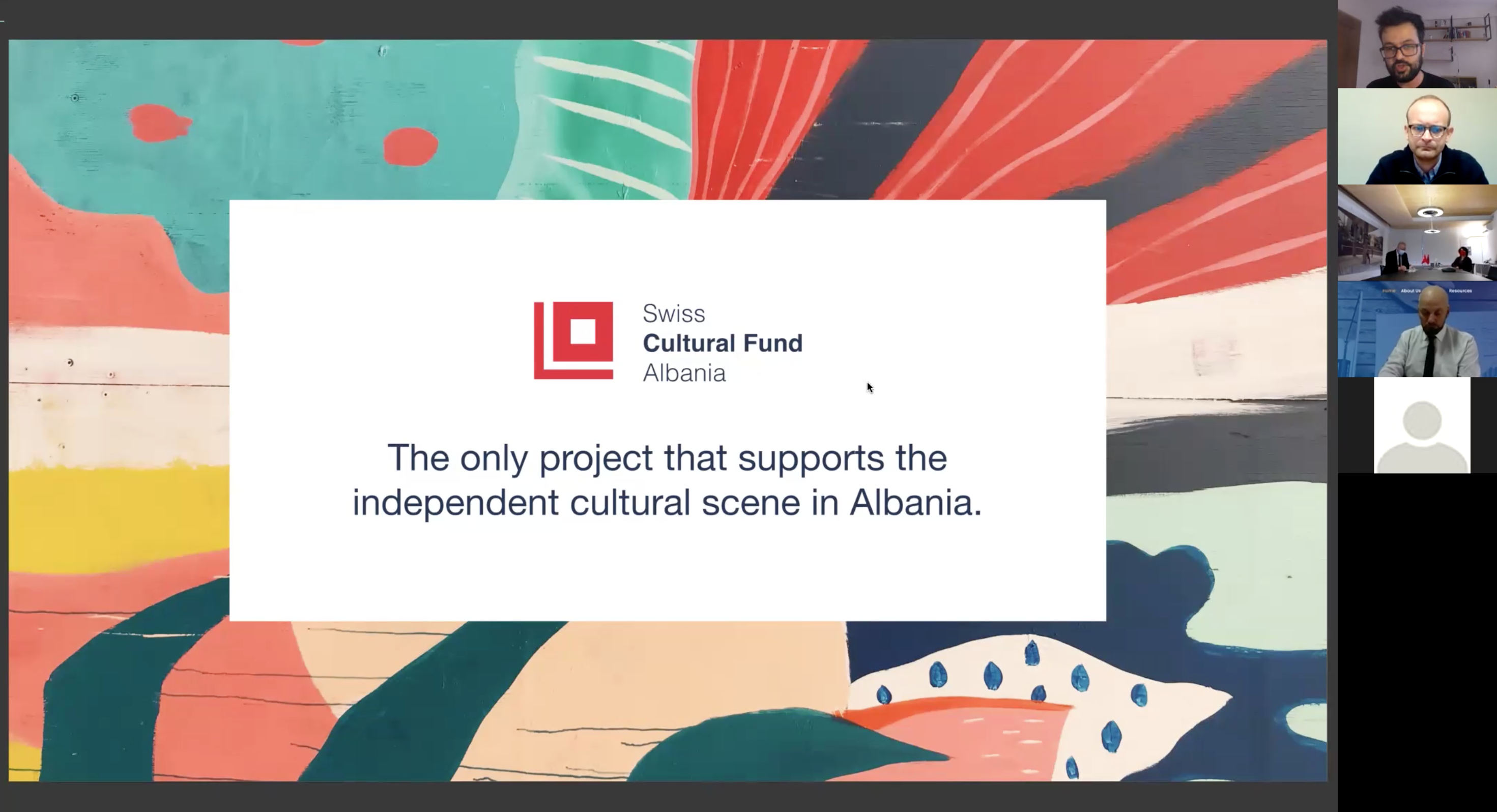 Posted at 11:03h in Uncategorized

Posted at 08:49h in Uncategorized

Following the call for the creation of virtual tours of cultural sites, we present the selected project for support.

We take this opportunity to thank every applicant for their time, energy, involvement and interest! We welcome and encourage each and every one of you to apply in our upcoming calls.

Posted at 20:59h in Uncategorized

To: Application package for the Open Call “for the design and implementation of virtual tours of cultural sites” launched on 1st October 2020.

The first change is in the Albanian language Application Form on page 7, section “Financial Plan”. The corrected text in the budget table under “Amount requested from SCFA” now reads as follows: “Maximum grant-requested to SCFA is 2,200,000 Lek” complying with our intent, as already expressed through our Application Guidelines Document page 2 , paragraph “What kind of expenses are reimbursable?” which also reads: “Maximum grant-request to SCFA is 2,200,000 LEK.”

The second change is to our application deadline, which will be extended from 15th of October to the 22nd of October.

We would like to apologize for any inconvenience caused.

Posted at 20:56h in Uncategorized

Based on all the questions that we have received by email between October 1st and October 10th 2020, we have compiled a list of Questions and Answers (PDF).

01 May Notice about the publication of grant winners

Posted at 13:22h in Uncategorized

The Swiss Cultural Fund in Albania would like to notify the applicants of the Sixth Local Grants Call and the Third Regional Grants Call, about a delay in the publication of winners.

The results of both calls are expected to be released in mid-May.

We would like to thank you for your patience and understanding.

Posted at 18:00h in Uncategorized

Based on all the questions that we have received by email between January 23rd and March 20th, we have compiled a list of Questions and Answers (PDF).